The 31st Scottish Open Volleyball Tournament rolls into Perth’s North Inch for this weekend’s annual competition. Recognised as the most popular volleyball event in the UK the tournament has again attracted over 100 teams from around the UK and Europe. European Interest comes in the shape of Leuven Volleyball Club from Belgium playing in men’s division one and the Faroese women competing in their division one. Both European sides are “weel kent” with the SOVT having been regular attenders over the years. 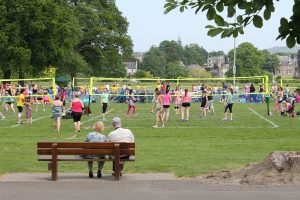 The volunteer organising committee was pleased to see the long term weather forecast for the competition weekend predicted to be warm and sunny which would put it on par with last year’s glorious sunny weekend.

Although the bulk of teams come from near and far, local teams are very much in evidence with a number of Perth District League sides taking on “new fun names” entering into the fun aspect of the competition, some playing in fancy dress. 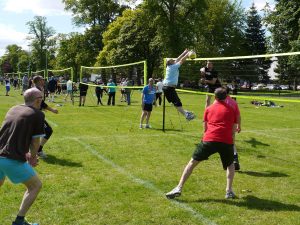 Play starts at 10 am on the Saturday morning after all 104 teams have registered their players and with almost 40 courts set up on the North Inch it provides a wonderful spectacle of fun as well as promoting volleyball as a tremendously social sport enjoyed by boys and girls, men and women around the world. Sunday’s play starts at 9 am and continues throughout the day with the knockout stages culminating in finals for all 7 divisions.

This entry was posted in Media, News. Bookmark the permalink.

Online entries for 2022 are now closed
toggle
Toogle Down